Atiwa Range of Forest Reserves, in South Eastern Ghana, is the closest rainforest to the capital city, Accra.

It is one of the largest surviving rainforests in West Africa and one of the most important for wildlife:  the jewel in the crown of Ghana’s reserves.

This lush, tropical montane forest, with clear running streams, grassland and clearings, holds some of Africa’s rarest plants and animals, such as the Atiwa Dotted Border, a slow-flying butterfly found nowhere else in the world.

The forest is threatened by bauxite mining which could bring much-needed jobs and foreign exchange earnings. However, investing in long-term employment for local people by developing a range of sustainable livelihoods, including eco-tourism, would be of much greater benefit now – and for future generations.

Mining at Atiwa could wreak havoc with the water supply of 5 million people, cause landslides, increase air pollution, destroy traditional food and timber sources, and lead to the extinction of many plants and animals.

Please support A Rocha Ghana in their efforts to save Atiwa for future generations!

You can help by signing the petition, making a donation or publicising the campaign.

Atiwa harbours mineralogical wealth including gold and bauxite deposits. The Government’s bid to industrialize and draw more value from its natural resources is leading it to develop its struggling bauxite industry. The aggressive pursuit of intensive mining, together with the drive to generate foreign exchange and revenue, is putting great pressure on the forest. 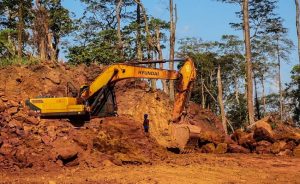 Over the years, there have been many prospecting and exploration projects by different companies including ALCOA (Aluminium Corporation of America).  In March 2011, Vimetco Ghana (Bauxite) Ltd., a 100% owned subsidiary of Vimetco  N.V., (an international industrial group that focuses on the aluminium industry) obtained several prospecting licenses in Ghana. Based on these, they expect to receive exclusive rights for bauxite mining at Kibi (i.e Atiwa Forest Reserve) and Nyanahin (i.e. TanoOffin Forest Reserve, with a total area of 468.66 sq. km) for the period of more than 50 years. They have carried out a comprehensive geological survey in these areas and are expecting to get confirmation of quite significant reserves of bauxite that can form the basis for a plant to provide alumina for their Chinese smelters (Vimetco, Annual Report 2011).  In 2010 the company therefore commissioned a Pre-Scoping Environmental Hydrological and Topographical Study involving stakeholder consultation and the consent of local community leaders in Kibi and Nyinahin Concessions as part of their plans for an Integrated Bauxite Project in Ghana.

A Rocha Ghana believes that bauxite mining will be disastrous for both people and wildlife. It will almost certainly involve unimaginable habitat destruction, soil erosion, loss of biodiversity and water pollution. It threatens to undermine the traditional land rights and religious beliefs of the Akyem Abuakwa people. It also poses serious risks to their rights to water, food, work, and their cultural rights. Where contamination is not controlled, the cost of the contamination will be transferred to other economic activities, such as agriculture and fishing and affect the livelihoods of local communities. It will also pose serious health problems for local people.
Artisanal (small-scale) mining

Artisanal mining, popularly called galamsey, is a very important income earning activity throughout the district. Virtually all of the gold mining is focused on alluvial occurrences in river valleys, especially the upper reaches of the Birim River, just downstream from Kibi. These small-scale mining activities by unlicensed individuals and groups are increasing and causing serious problems like water pollution, food contamination, abandoned traditional farming systems and land management practices for local communities. Most affected is the Birim River which suffers from pervasive sediment loading. There is also extensive, legal, small-scale mining along some of the major valleys such as the Suhen and Emuo (also Amaw) rivers, on the SW flank of the Range.

Unsustainable exploitation of forested areas, coupled with the relatively high prevalence of bush fires, has resulted in the depletion of important timber species such as Odum, Obeche, Emire and mahogany, abundant before the 1960s, but now locally rare.
Illegal chainsaw logging

Illegal logging occurs throughout the forest reserve. Due to the weak system of monitoring and poor implementation of regulations, illegal logging by chainsaw operators has been prevalent in Atiwa, especially since the 1990s. Logging has escalated so much that at times the army has had to be called in.
Bushmeat hunting

Ghana’s largest roadside bushmeat market is at Anyinam, at the fringe of the Atiwa Range, where meat is sold throughout the year. A 2001 bushmeat market survey, targeting Accra and Kumasi, indicated that a large percentage of the bushmeat found there comes from Atiwa.  Hunters are known to use guns, poisonous chemicals, traps and fires, targeting anything edible,  including species which have legal protection in Ghana, such as Black-and-white Colobus, Spotted Palm Civet and  Giant and Long-tailed Pangolins.
Farm encroachment

The potential for eco-tourism in Atiwa

Atiwa is the nearest rainforest to Accra. A Rocha Ghana shares the vision of many state and non-state agencies that Atiwa has great potential for eco-tourism. Early assessments done by the Forestry Commission of Ghana has revealed that Atiwa has unique natural, cultural and historical resources that could be harnessed through ecotourism for the socio-economic development of the area. 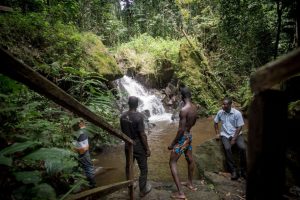 At present the area lacks people with the necessary training and experience to run tourism programmes but there is a large labour pool. Essential facilities such as accommodation and catering services are not yet up to the required standard, as facilities fall into the budget category, with a very limited number of rooms (CI-Ghana 2002). This need not be a real problem considering the proximity of the area to Accra and Koforidua where standard facilities exist. Hygienic conditions at drinking bars and food selling places would need a lot of improvement (CI-Ghana 2002).

Thirty communities have been selected for the implementation of the Atiwa Critical Conservation Action Project. The choice of communities was informed by a scoping exercise conducted by A Rocha Ghana in November 2012. During the scoping it was observed that Atiwa Forest Reserve was surrounded by more than 40 settlements with an estimated population of about 750,180 according to the 2000 national population and housing census report (MLF, 2002). The 30 Project communities were chosen in consultation with key stakeholders in the project area including the District Assembly and the Forestry Service Division based on such factors as: